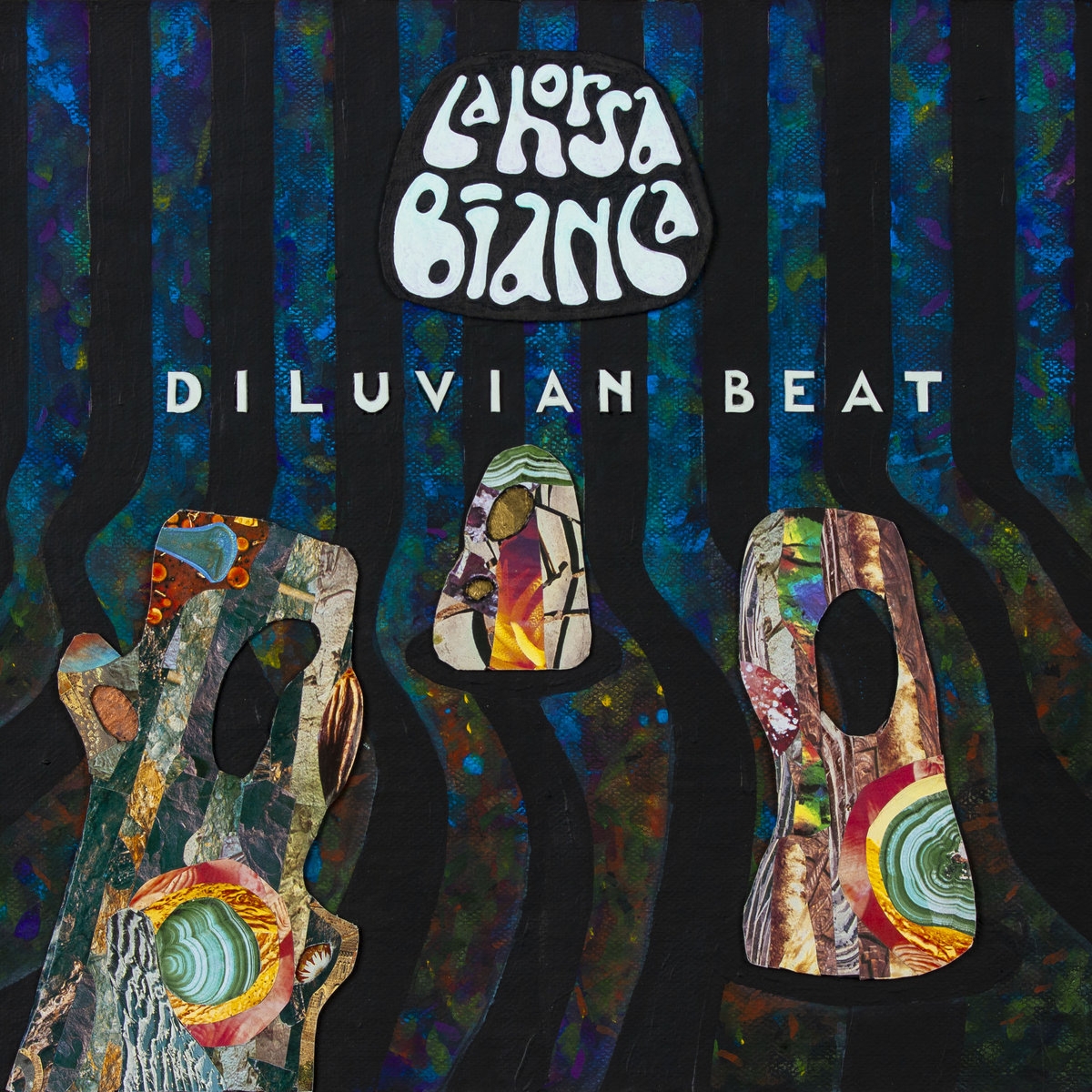 Today, together with the portal It's Psychedelic Baby, we present the third full-length album of the Kharkiv psychedelic band La Horsa Bianca — "Diluvian Beat", which confidently holds the bar set by previous LPs. We have already listened to the release and are ready to share our impressions of it.

"Comes up the wave which takes us high" – like this exactly and without any exaggeration, La Horsa Bianca take their listeners apart from the commonness musically and physically to douse them with paints from the warm palette of this release.

Those mentioned words from the poem of Yuri Izdryk were put on music and became the first composition of La Horsa Bianca new album called "Diluvian Beat". This is the third release of the band which plays psychedelic rock of this genre brightest period – of 70’s. Coming out date of the six-track album is the 11th of December and this work is likely to embody the little holiday of farewell to the tough year of 2020.

Material writing for this release had lasted a little more than a year although some old compositions from the far 2016 were included into the album. The recording took place on the Digout studio in native Kharkiv. Album has its special structure, described musicians themselves – all compositions are divided into pairs each of which is united by concrete idea. Already mentioned first composition "Encyclica" is united with the sixth one called "Trumpets of the latter day" by presence of lyrics. These two songs exactly do not let the album be totally instrumental. The "Encyclica" track could be heard at one of the band’s March performances. What about "Trumpets", the eponymous poem of Bohdan-Ihor Antonych has become the lyric base of the song:

"It’s a stunningly powerful text, which completely enthralled us with its hypnotic rhythm and surrealistic imagery."

The animation video clip was the addition to this musically-poetical tandem. Its premiere was held on the foreign portal It's Psychedelic Baby Magazine. The collective members created that cartoon by themselves as they are used to such approach in general:

"DIY is the name of the game – we are self-produced, self-recorded and all the rest, so it followed naturally. I have never animated anything before, this was a great experience. Felt like a drawn out meditation on the poem to bring out what isn’t within it but works off of it" – Eugene Manko

The lyrics chosen by members clearly demonstrate how deep is their understanding of genre aesthetics. The words "we are slowly spilling over from body to body" is the perfect description of the state a listener is in while "sailing" by band’s music. Their melody is nothing else but the body, weaved of musical ornaments, which so gladly welcomes everyone to the inside of itself. And this motive of "floatage", expressed by music as well as by lyrics, also fits the concept of album – La Horsa Bianca dedicated this work to the flood topic, about what the given name "Diluvian Beat" tells. The word "diluvian" is considered outmoded, it comes from Latin and refers to the times of the scriptural flood, which layers one more sense above the tries to interpret band’s creative expression.

The cataclysms theme is supported by next pair of tracks "A missage", called so in honor of flooding from "Winnie-the-Pooh" story and "It's not but damn" inside of which the "tsunamisness" feeling was architected by musicians. Such effect in melody is reached by the guitar madness of Kyrylo Gonchar and Andrew Brahin, that unpredictably raises just after the tender keys of Olga Ksendzovska. That much surprise is also the flute of Eugene Manko, appeared in the track. The percussion of Igor Avdeyev gets its potential completely freed in those "Trumpets of the latter day", again, where the instrument managed to sound in all possible rhythms, has bounded with the bass line of Manko and came back to itself.

The third pair is formed by "The mouse principle" and "Laws of slow motion", two tracks which keep no sense support of the following theme, but instrumentally continue following the adjusted direction.

In general, "Diluvian Beat" sounds very brightly. Once again new release proves the mastery of members, banded under the lucky star, or rather under the sun, that leads them to the fruitful points within the chosen genre. Psychedelic rock really has to be physically sensed, it should become some kind of a seance and in this case it is. La Horsa Bianca does not lose its goal from the view – to distribute "the music which saturates and enriches as the good literature does" among masses, and it is surely the reason to evolve in the company of this collective.

The opinions expressed in the reviews convey the views of the authors themselves and do not necessarily reflect the position of Neformat.com.ua

La Horsa Bianca — band from Kharkiv playing psychedelic rock. The collective has three full-length albums. You can read a review of the debut LP "Somatic Schematic" (2018) at this link.

1. Encyclica
2. A missage
3. The mouse principle
4. Laws of slow motion
5. It's not but damn
6. Сурми останнього дня (Trumpets of the latter day)